Technology to recover and modulate the aromas lost during alcoholic fermentation 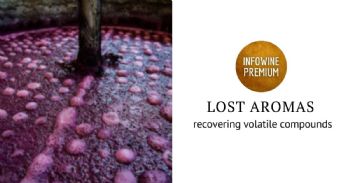 During alcoholic fermentation, a part of the volatile compounds is lost. This loss is mainly due to the dragging effect of the carbon dioxide produced by the yeasts, causing a loss of aroma in the wine.

Volatile compounds that were lost in this way were identified and quantified, and these compounds were found to belong to various chemical classes (i.e., esters, alcohols, acids, terpenoids, etc.) with a great impact on the aroma of wine. Therefore, a system capable of recovering these compounds was developed.

To evaluate the qualitative effects of the system, several fermentations were carried out on an industrial scale, finding statistically significant differences in the chemical profile of the wines produced and observing interesting esterification reactions.

Finalist work for the ENOFORUM 2020 Award: video of Lorenzo Guerrini presentation on the occasion of Enoforum Web (May 5-7, 2020)

Oxygen and antioxidants
Infowine Focus
Oxygen consumption and wine resistance to oxidation can be measured and correlations can be found using cyclic voltammetry, and a modern metaboloic experiment produces new knowledge concerning wine...
Published on:10/12/2021

Improving wine quality during and after AF
Infowine Focus
A series of exclusive videos linked solely on how to improve our wines quality
Published on:09/28/2021