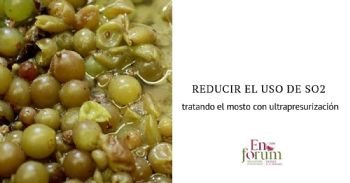 Ultra-High Pressure Homogenization (UHPH) is a high throughput and effective technique useful to sterilize fluid foods at low temperatures or even under refrigeration temperatures. The shear forces and impact across the valve are able to eliminate whatever kind of microorganisms without affect sensory quality.

A white must (Vitis vinifera L.) was processed with UHPH and compared with two untreated controls, a must that underwent a spontaneous fermentation (without sulfites) and another must added with 35 mg/L of total SO2. All were inoculated with the same Saccharomyces cerevisiae strain.

UHPH treatment led to the total elimination of grape microorganisms considering an initial population of 6-log CFU/mL of wild yeasts and fungi, and approximately 4-log CFU/mL of background bacteria.

In a parallel assay, UHPH-processed must without inoculation showed absence of fermentation for several months at 18 °C. The musts UHPH processed showed a lighter appearance (10%) before fermentation compared to the control. Triangular test showed the existence of sensory differences between the wines obtained and the preference tests showed that the judges found the UHPH-wine more fruity.

Industrial relevance of UHPH is that allow must processing reducing sulfite addition and controlling wild and spoilage microorganisms. This opens new opportunities in the use of emerging fermentation biotechnologies such as the use of non-Saccharomyces yeasts and the yeast-bacteria co-inoculations.

The paper reproduced in this video-seminar was presented at the 12th edition of Enoforum (Vicenza, Italy, May 21-23, 2019). Winner of the SIVE OENOPPIA Awards 2019