42nd OIV Congress: the third in Switzerland is a huge success

The 17th General Assembly of the OIV concluded the week of scientific work with the adoption of 18 new resolutions. 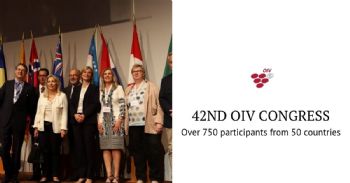 Over 750 participants, researchers, professionals in the sector, academics and students from 50 countries participated in the 42nd World Congress of Vine and Wine held in Geneva, Switzerland.

With the central theme of ‘Preservation and innovation: expectations at the environmental, economic and social level’, the discussions of the OIV Congress dealt with the following issues: climate change, to which vines are highly sensitive; value promotion of products (terroirs, origin, sanitary and food-grade quality of vine products, sugar content, allergens, etc.); and vine protection, with the highly topical question of input management.

On the opening day of the Congress, the latter theme was also the object of a public conference entitled ‘A reasoned approach to inputs: scientific contributions and consumer perception’.

The President of the OIV, Regina Vanderlinde, highlighted the excellent quality of the 348 technical and scientific presentations – some of which came from countries such as Japan or even Nepal.

The Director General of the OIV, Pau Roca, who presented a report on the world vitivinicultural situation at the opening ceremony, praised Switzerland’s organisation of this remarkable Congress, which was the fourth biggest in terms of presentations in the last 10 years.

Papers that have received author consent for publication will be available on the EDP Sciences Web of Conferences website in September.

As part of the Organisation’s sustainable approach, this 42nd Congress was the first ‘paper-free’ OIV Congress. It was also the first time that all of the information regarding the events and scientific work presented was available for consultation via an app.

The 17th General Assembly of the OIV concluded the week of scientific work with the adoption of 18 new resolutions.

With regard to climate change – a major concern for the sector – it is worth highlighting Resolution OIV-VITI 564B-2019, which defines polyclonal selection, as well as an OIV protocol for the protection and conservation of the intravarietal diversity and the polyclonal selection of vines for grape varieties with wide genetic variability.

Consumer expectations and the reduction of the use of SO2 – issues also at the heart of debate within the sector – are the object of Resolution OIV-OENO 594A-2019. This Resolution establishes an innovative practice with the objectives, among others, of reducing the microbial loads of indigenous microorganisms (especially yeasts), and of reducing SO2 levels used in winemaking.

The OIV Assembly also marked the passing of the baton from Switzerland to Chile, the host country for the future 43rd World Congress of Vine and Wine, to be held in Santiago from 23 to 27 November 2020.