The first results of Action 4 of ValorinVitis Project

The main objective of the Project's Action 4 is to evaluate the adaptability of  hybrids of last generation resistant to downy and powdery mildew to the pedoclimatic conditions of the Piacenza area. As part of this Action, a new collection of vine plants was established in Vicobarone, including the following new hybrids: SAUVIGNON RYTOS, SAUVIGNON KRETOS SORELI, CABERNET EIDOS, MERLOT CHORUS, UD 31-120 r, U.D- 72-096, U.D. 31-103 U.D. 30-080 B. and U.D. 80-100 B. During the 2018 season, weekly monitoring was performed. During each monitoring, for each resistant hybrid and for the Ervi variety, used as a sensitive witness, were measured: 1) vegetative and reproductive phenological stage according to the BBCH scale; 2) incidence and severity (EPPO standard) of downy mildew, powdery mildew and black-rot. Overall, no obvious symptoms of powdery mildew were detected and only a sporadic occurrence of downy mildew (a few lesions) on Ervi. On all the varieties, instead, an incidence of black-rot was higher than 10%.

During the flowering and enlargement of the grapes some leaves were taken on which the following resistance components were evaluated in a controlled environment: efficiency of infection, area under the disease progress curve (AUDPC), duration of the latency period, sporulation, size of the lesions. The expression of resistance to downy mildew was also evaluated on clusters, inoculating them in the vineyard with a known suspension of P. viticola. The resistance components analyzed on the bunches were: infection efficiency, resistance level (OIV 453), AUDPC, duration of the latency period.

A further laboratory test was carried out during the cluster closure phase to evaluate the foliar resistance against powdery mildew. The resistance components evaluated in this case were: duration of the incubation period, duration of the latency period, incidence and severity.

In general, some varieties have shown a good resistance to artificial infections of downy mildew (low incidence and low or no sporulation). The UD 72-096 variety suffered infection but was able to hinder the sporulation in a relevant way. Well-differentiated trends and behaviors have also been observed on powdery mildew. A complete processing and analysis of the data will contribute to a better understanding of the obtained results.

The data obtained will be used to implement the vite.net DSS platform provided by Horta srl, calibrating the phenological model and the disease models (downy and powdery mildew).

Finally, in the harvest of 2018, the rottenness of the bunch was monitored and some shelf-life tests were carried out. The bunches of Ervi proved to be less susceptible to black rot, than Barbera in a statistically significant way.

In the 2019season the described tests will be repeated and the DSS vite.net will be used to evaluate the impact on the efficacy and on the costs of defence resistant varieties. It will also be expressed an assessment of the adaptability of new resistant hybrids to the pedoclimatic conditions of Piacenza. 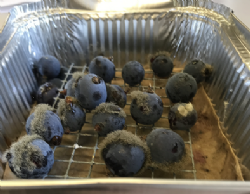