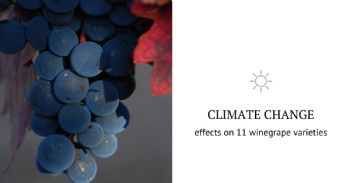 Climate change is severely impacting agriculture and the environment in multiple ways, and it could jeopardize wine production worldwide.

A new study, carried out by an international team of researchers, including experts from INRAE and the Bordeaux Sciences Agro Institute, and published in Proceedings of the National Academy of Sciences, shows that 56% of the world’s winegrowing regions could disappear under a 2 °C warming scenario, a number that could rise to 85% if warming reaches 4 °C. However, increasing winegrape diversity within vineyards could halve the potential losses of winegrowing regions in the first scenario and cut losses by a third in the second.

Viticulture, as many other types of agricultural production, focuses its production on a limited number of crop varieties. However, diversity within the cultivated species could be the key to increasing resilience in the context of climate change. Winegrape is an excellent subject to put this hypothesis to the test, since there are over 1,100 documented varieties currently being cultivated. Moreover, winegrape production is very sensitive to changes in temperature, which makes it a perfect indicator of the effects of climate change on agriculture.

The study explored the effects of climate change on 11 winegrape varieties: Cabernet-Sauvignon, Chasselas, Chardonnay, Grenache, Merlot, Monastrell (or Mourvèdre), Pinot noir, Riesling, Sauvignon blanc, Syrah, and Ugni blanc. These varieties represent 35% of the world’s cultivated surface, and 64% to 87% of the cultivated surface of winegrowing countries like Australia, Chile, France, New Zealand, Switzerland, and the United States.

Researchers developed a model to estimate the different stages of development of each of the varieties—budbreak, flowering, and veraison. They later applied the model to different winegrowing regions worldwide using climate projections— a 2 °C warming scenario for 2050 and 4 °C for 2100—to determine where each variety should be planted. These models were calibrated and validated with data from multiple databases, including some developed and supported by INRAE (the variety collection of Vassal-Montpellier, and data from TEMPO portal developed by Agroclim Unit in Avignon).

Thanks to these new techniques, it is possible to identify varieties that may benefit from future conditions. Consequently, production of late ripening varieties such as Grenache and Monastrel could be intensified in the current winegrowing regions, whereas early budding varieties such as Chasselas, Pinot Noir, and Chardonnay could be produced in new regions in high latitudes, which will develop their own vineyards.

Researchers were also able to quantify the evolution of winegrowing areas in several countries. In the Mediterranean, countries like Italy and Spain are expected to suffer great losses (around 65%), and little gains (less than 10%) of suitable areas, whereas higher latitude regions like New Zealand or the North of the United States are mainly projected to see gains (20 to 100% and 15 to 60%, respectively). For countries in more temperate zones, like France and Germany, a balance of losses and gains (around 20%) is anticipated. This research highlights the importance of better understanding the adaptive capacity of different varieties of winegrapes to future changes, in order to help growers minimize the impact of climate change on their vineyards. Further studies will be required on less prominent varieties— autochthonous—which are generally unknown to the public, but that, in some cases, could be more efficient in future climate conditions.

Finally, it is crucial to raise awareness among the consumers, encouraging them to try new varieties so that producers can diversify their production and increase their adaptive capacity. For some vineyards with a designation of origin (AOP3 in France, DOP in Italy, etc…), this transition must be accompanied by changes to the production regulations. Many of these issues have been and are currently being discussed in France within the framework of the project LACCAVE, launched in 2012 and coordinated by INRAE, which aims to define adaptation strategies to climate change for French vineyards.

The future of winegrowing regions is essentially in the hands of human decisions. At a local level, adapting winegrowing practices and choosing better suited winegrape varieties will prevent, at least partially, the disappearance of certain vineyards. Globally, however, the future of these areas depends on the political and social decisions that will be made in the coming years, on greenhouse gas emissions, and the resulting global warming.