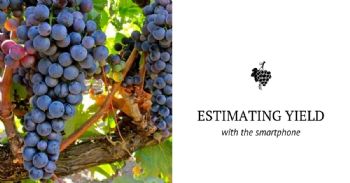 The ultimate symbol of modernity, the smartphone isn’t the first image that comes to mind when you think of an old-world vineyard, but thanks to WSU’s Manoj Karkee, it might soon be as common in the fields of a Cabernet estate as it is in a Starbucks, enabling vintners to efficiently predict grape yields, save on labor costs, streamline production and pass along savings to the consumer.

Estimating crop yields is a task tied to nearly every aspect of a grower’s operation from irrigation to contracts, but the job remains labor-intensive, inefficient and its methods vary from vineyard to vineyard.

“Currently, growers send workers into the fields to collect a lot of samples for counting, weighing and sizing grape clusters,” Karkee said. “This tool can do the same thing. The App will estimate the number of berries, clusters and other parameters on a given vine that are related to estimating crop-load in vineyards.”

The first version of the App will take about a year to develop.

Since arriving at WSU in 2010, Karkee, an associate professor of biological systems engineering, has worked at the Center for Precision and Automated Agricultural Systems in Prosser, where he leads a team of 10 researchers in the Agricultural Automation and Robotics Lab.

“Robots and software, sensors and wireless communication are changing the way we grow our food, and offer exciting new ways to solve challenges in sustainable production,” Karkee said.

But Karkee also noted that other universities have applied some of these technologies to the challenge of efficiently estimating vineyard yields, but they haven’t been successful yet for commercial adoption.

“They were using larger platforms with cameras to perform the similar tasks,” Karkee added. “But my hypothesis has been that if we can provide a tool that can be used by pretty much everybody at low cost, it will be more practical, and more useful to growers and managers.”

Nearly everybody can operate a smartphone, Karkee realized, and most phones are already equipped with useful technology. “Our cell phones have a lot of sensors and very powerful cameras, and most of us already have these tools with us, so why not use them to assist in farming?”

Karkee’s App will allow growers to cut labor and vineyard management costs, saving them money upfront. And though the App will begin with the basic functions of gathering berry and cluster data, it has far-reaching potential for more refined development and enhanced functionality, eventually taking much of the guess work out of the growing and harvesting processes.

“The development and use of this App will lead to an understanding of the variability in vineyards and eventually full-scale crop load estimation for a given vineyard,” Karkee added, “so farmers can grow the right amount of crops to achieve desired quality and yield of grapes.”

Beyond yield estimations, Karkee anticipates more uses, such as detecting pest infestation and water stress. “So really, this is a long-term project from that perspective.”

Recently named one of 11 “pioneers” in North America by Connected World magazine, Karkee imagines that farm work—particularly the difficult and dangerous jobs—will one day be automated, making for a safer and more efficient industry.

“This App takes us one step closer to that end goal.”