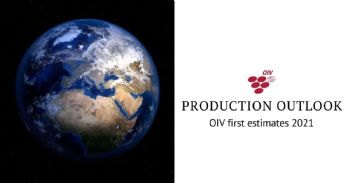 In 2021 extremely low world wine production volume is expected, at a level similar to 2017. This would be the third consecutive year where the global production level is below average.

Based on the information collected on 28 countries, which represent 85% of the world production in 2020, 2021 world wine production (excluding juices and musts) is estimated between 247.1 and 253.5 mhl, with a mid-range estimate at 250.3 mhl.
The 2021 wine production can be considered extremely low, only slightly above the historically small production of 2017. This year’s expected volume seems to have fallen by 4% compared to 2020 (which was already below- average) and is 7% lower than its 20- year average. This is the result of unfavourable climatic conditions that severely impacted the major wine-producing countries in Europe this year. The South Hemisphere and the USA seem to be exceptions in this overall negative scenario and tend to balance the fall of volume seen in the EU.
This is the third year in a row that world wine production is below average. However, the impact of this downfall for the global wine sector is yet to be evaluated given the current context where the covid-19 pandemic is still generating a relatively high degree of volatility and uncertainty.

European Union
In the European Union (EU), weather conditions did not favour grape growers in 2021 and wine production is estimated at 145 mhl (excluding juices and musts). This volume shows an annual decrease of 21 mhl (-13%) compared to 2020. Overall, preliminary estimates for 2021 wine production in EU countries indicate quite a heterogeneous situation, mainly due to different weather conditions throughout the year.

Year 2021 proved to be unfortunate for wine production in the three largest EU producing countries – Italy, Spain and France, which together account for 45% of the world and 79% of the EU wine production – mainly due to the late frosts at the beginning of April. Italy, still ranking first at 44.5 mhl, estimates a drop of 9% in its 2021 wine production compared to 2020 as well as its last-five-year average. Spain is the 2nd largest wine producer in the world in 2021 and estimates to produce 35.0 mhl. This level, however, is expected to be 14% lower compared to 2020 and 9% lower than its five-year average. France bore the hardest brunt of a disastrous vintage with severe frost in April, followed by summer rain, hailstorms, and mildew. Consequently, it foresees a production level of 34.2 mhl, representing a drop of 27% compared to 2020.

On the other hand, several countries within the EU expect a positive growth with respect to last year. For example Germany, the fourth largest European wine producer, has an estimated production volume of 8.8 mhl (+4%/2020), notwithstanding the late frost episode that heavily affected some of its neighbouring countries. Portugal, with 6.5 mhl, is expected to record a wine production volume slightly above its 2020 level (+1%). Another large producer, Romania, whose harvests have been subject to very high volatility in the recent years, anticipates a surge in wine production in 2021, with 5.3 mhl (+37%/2020), a level 29% above its last five-year average. Hungary’s estimated wine production is 3.1 mhl in 2021, a level 6% above 2020 and 4% higher than its five-year average. Bulgaria, with a production level of 0.9 mhl is 7% higher compared to last year, but 15% lower than its last fiveyear-average. Lastly, Czech Republic expects a wine production of 0.6 mhl, a level 2% higher than 2020 and in line with its average.

Outside EU
In the USA, the preliminary estimate for 2021 wine production is 24.1 mhl. This figure is 6% higher compared to last year, which was characterized by a relatively low harvest due to wildfires and smoke taint. However, the production is expected to be 3% lower than its five-year average, which can partially be attributed to drought-like conditions in summer in certain wine regions.

At this time of the year, data on grapes harvest in China is not available. However, wine production is likely to continue the contraction that started in 2016 for structural reasons outlined in previous OIV reports on the state of the vitivinicultural1 sector.

In the Eastern European countries, the scenario is overall quite positive. Russia’s 2021 wine production, estimated at 4.5 mhl, is marginally higher than last year (+2%/2020) but 2% below its fiveyear-average. Wine production in Georgia is estimated to increase by 22% compared to the already large production of 2020, with a record-high level of 2.2 mhl, due to a high grape yield this year. In Moldova, despite the unfavourable weather conditions such as late frost and heavy rains, 2021 wine production is estimated at 1.1 mhl, marking an increase of approximately 20% compared to a low 2020 volume which was impacted by a drought.

Wine production volume in Switzerland continues to decline in 2021, due to bad weather - notably frost in April - followed by hail and then mildew hitting the crops in midsummer, thereby recording 0.8 mhl, the lowest volume in 20 years. Swiss wine production volume is expected to be 10% lower compared to 2020 and 22% lower than the average observed over the last five-year period.

South American countries have registered steep increases in the production levels with respect to 2020. The lack of severe weather conditions this year, usually caused by El Nino seems to have contributed to successful harvests and high wine production levels in 2021. Chile is the largest producer of the region in 2021, with wine production peaking at 13.4 mhl, the highest volume recorded in 20 years, with a 30% increase compared to its 2020 level. In 2021, Argentina’s wine production has risen significantly to 12.5 mhl (+16%/2020) after a very low production registered last year. Brazil has a high estimated wine production volume of 3.6mhl in 2021. This is Brazil’s largest production volume since 2008, recording a +60% with respect to the last year and +46% compared to its five-year average.

In South Africa, wine production in 2021 is estimated at 10.6 mhl, which marks an increase of 2% in production compared to 2020. This is the third consecutive year of continuous growth after a prolonged period of drought which started in 2016.
In Oceania, Australia registered its highest harvest since 2006, shooting its wine production level in 2021 up to 14.2 mhl, (+30% compared to 2020 and +14% with respect to its last five-year average). A combination of mild temperatures, low disease pressure and favourable harvest conditions have accrued to this large harvest in Australia, after the previous two vintages being ravaged by drought and fires. New Zealand is the only exception in the Southern Hemisphere. After a record-high wine production level last year, New Zealand has produced 2.7 mhl in 2021 which is 19% lower than last year and 13% below the last-five-year average. This reduced harvest has largely been caused by late frosts in springtime.

For more information, access to the Press Release and recording of the video conference