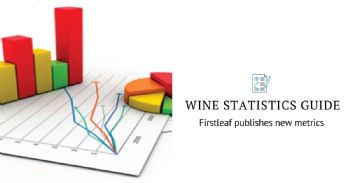 The wine subscription company Firstleaf has gathered the key metrics about the international wine industry in one place with their Wine Statistics guide.

This new guide is an outstanding resource if you're looking for quick facts about the wine industry. All of the information comes from reputable industry sources such as the International Organisation of Vine and Wine, Wines Vines Analytics, and the Wine Institute, as well as reliable government sources like the U.S. Bureau of Labor Statistics and National Institutes of Health.

While European countries are the most active wine producers — with four nations on that continent among the top ten in annual production — nations on other continents are major players as well.

Australia — a nation and continent in one — produces the 6th most wine of any country in the world, at 317 million gallons.

Only six other U.S. states produce even as much as 1 million cases. These are:

While the other U.S. states don't produce much wine, it doesn't mean that winemaking isn't happening. Even though the vast majority of US wine is produced in California, most wineries are somewhere else. Of the 10,472 US wineries, 5,859 are outside of California. Independent winemaking is alive and well across the country.

Wine consumption is a fascinating topic with some surprising statistics.

France and Italy are 22nd and 23rd in population among the world's nations, but 2nd and 3rd in total wine consumption. Only the United States — which has approximately 5 times more people — drinks more.

When you look at wine consumption per capita, the US doesn't even crack the top 20 among the world's nations.

Europe is by far the most wine-friendly place in the world. Of the top ten wine drinking nations, when calculated on a per-person basis, nine are in Europe. The only non-European country among the top ten is Australia.

The champion nation of wine drinking? That distinction goes to the 10.1 million people of Portugal, who, on average, drink 12.8 gallons of wine per person, per year.

In the United States, the most wine by volume is consumed in California. But you might be surprised at the top 5 wine drinking states per capita. They are:

California, despite making the most wine and being the undisputed center of the U.S. wine industry, is only in 6th place, drinking .616 gallons per capita on average.

For example, neither Canada nor Indonesia appear among the top 10 wine consuming nations. But both appear in the top ten in wine spending — Canada is 7th, at $16.1 billion, and Indonesia is 9th, at $14.1 billion.

At the top of the wine sales list? No surprises there. The big three — the United States, France, and Italy — top the list.

The Wine Industry during COVID

We are obviously in the beginning stages of understanding how the international pandemic affected the wine industry. Some interesting data coming out of the United States suggests that wine sales didn't suffer too much, and may in fact have increased.

The U.S. National Institutes for Health tracks wine purchases by volume on a state by state basis. Not all states report results each month, but the data for March 2020 was encouraging. Of the 16 states that reported wine sales that month, 12 saw year-over-year increases in wine purchases, compared to the March average for 2017-2019.

All wine tourism statistics were, of course, from a pre-pandemic world. Figures like the 23.6 million visitors to California wineries, and the 10 million annual wine tourists who come to France (spending an estimated $6 billion), won't be approached in 2020 or 2021.

But the grapes are still growing, new vintages being bottled, and older ones aging. Future wine tourists will have plenty of interesting options to choose from.