New 4.0 laboratory technology for the tartaric stability of wines 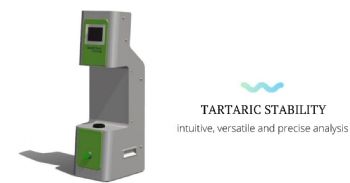 The tartaric stability of a wine is considered a technical basis of oenology and has always been the focus of studies in Research Laboratories. Each wine has its own level of stability, which is assessed in a variety of ways that differ greatly depending on the instruments available and on specific production requirements.

To check the tartaric stability of a wine, a highly rigorous test is performed with stabulation for six days at a temperature of -4 °C: the stability of a wine can be clearly determined by observing the deposits that form during the test.

It is a very effective test, but it takes a few days to perform it: in the wine cellar, production-related decisions have to be made much more quickly. This is why other types of tests have been developed, the accuracy of which depends on their nature and the way they are performed.

The most practical test, which is widely used in oenological laboratories, is the “mini-contact” test, which involves monitoring the drop in conductivity (crystal growth) after adding potassium bitartrate to a wine subjected to continuous stirring at a low temperature.

With this principle in mind, the R&D department of Ju.Cla.S, a company part of VASONGROUP that designs and manufactures cutting-edge machinery for the wine industry, has developed SmartCheck®, an innovative laboratory instrument for assessing tartaric stability, which meets Industry 4.0 requirements.

A modern instrument, in line with Industry 4.0 principles

When designing SmartCheck®, the Ju.Cla.S R&D team, in collaboration with the Enologica Vason Laboratory, took into account all possible test variables and, after having meticulously optimised them, developed a highly versatile and compact instrument: slightly bigger than a home printer, SmartCheck® measures 24x67 cm, has a 6-inch display and can be easily controlled by a smartphone app using an Internet connection, which allows it to download data remotely.

With SmartCheck®, assessments can be made at five different temperatures for the time required by the operator; this makes it a “direct” instrument that can be used to carry out more in-depth scientific studies and to control the production stages, obtaining a precise parameter so as to ensure repeatability (Fig. 1).

The results can be viewed in real time on the display, making it possible to monitor the test using five parameters: temperature, initial conductivity, instantaneous conductivity, differential conductivity and time, thanks to the countdown to the end of the assessment.

The data can be read on a smartphone or on a PC: through instruments such as SmartCheck®, the oenological laboratory can be thought of as a means of gaining knowledge and of providing production inputs for an interconnected wine industry, in keeping with the modern approach of the Industry 4.0.

Some economic observers have found that companies, in general, are able to increase efficiency thanks to the Industry 4.0, which is crucial as it allows them to maintain their competitive advantage.

Some of the areas of improvement for companies applying Industry 4.0 principles include:

With SmartCheck®, we can obtain a reliable and customised parameter for each wine, which can serve as a guideline for making decisions regarding winemaking processes while remaining constantly interconnected with the wine cellar. In this way, thanks to Juclas, we are laying an important foundation for measuring and monitoring production inputs so that in-house efficiency can be improved.

The Juclas laboratories are currently developing an upgrade in order to also obtain Tsat (saturation temperature) and DIT (which expresses the percentage of instability through Oenodia’s Stabilab®).