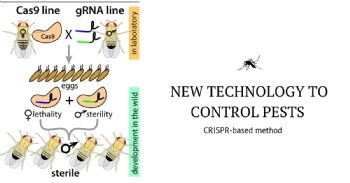 Combining historical lessons with modern genetic technologies, scientists at the University of California San Diego have developed a new way to control and suppress populations of insects, potentially including those that ravage agricultural crops and transmit deadly diseases.

A schematic of the new precision-guided sterile insect technique (pgSIT), which uses components of the CRISPR/Cas9 system to disrupt key genes that control female viability and male fertility, resulting in sterile male progeny.

A description of the new “precision-guided sterile insect technique,” or pgSIT, is published Jan. 8 in the journal Nature Communications.

When pgSIT-derived eggs are introduced into targeted populations, the researchers report, only adult sterile males emerge, resulting in a novel, environmentally friendly and relatively low-cost method of controlling pest populations in the future.

“CRISPR technology has empowered our team to innovate a new, effective, species-specific, self-limiting, safe and scalable genetic population control technology with remarkable potential to be developed and utilized in a plethora of insect pests and disease vectors,” said Akbari, an assistant professor in UC San Diego’s Division of Biological Sciences. “In the future, we strongly believe this technology will be safely used in the field to suppress and even eradicate target species locally, thereby revolutionizing how insects are managed and controlled going forward.”

Since the 1930s, agricultural researchers have used select methods to release sterile male insects into the wild to control and eradicate pest populations. In the 1950s, a method using irradiated males was implemented in the United States to eliminate the pest species known as the New World Screwworm fly, which consumes animal flesh and causes extensive damage to livestock. Such radiation-based methods were later used in Mexico and parts of Central America and continue today.

Instead of radiation, the new pgSIT (precision-guided sterile insect technique), developed over the past year-and-a-half by Kandul and Akbari in the fruit fly Drosophila, uses CRISPR to simultaneously disrupt key genes that control female viability and male fertility in pest species. pgSIT, the researchers say, results in sterile male progeny with 100 percent efficiency. Because the targeted genes are common to a vast cross-section of insects, the researchers are confident the technology can be applied to a range of insects, including disease-spreading mosquitoes.

The researchers envision a system in which scientists genetically alter and produce eggs of a targeted pest species. The eggs are then shipped to a pest location virtually anywhere in the world, circumventing the need for a production facility on-site. Once the eggs are deployed at the pest location, the researchers say, the newly born sterile males will mate with females in the wild and be incapable of producing offspring, driving down the population.

“This is a novel twist of a very old technology,” said Kandul, an assistant project scientist in UC San Diego’s Division of Biological Sciences. “That novel twist makes it extremely portable from one species to another species to suppress populations of mosquitoes or agricultural pests, for example those that feed on valuable wine grapes.”

The new technology is distinct from continuously self-propagating “gene drive” systems that propagate genetic alterations from generation to generation. Instead, pgSIT is considered a “dead end” since male sterility effectively closes the door on future generations.

“The sterile insect technique is an environmentally safe and proven technology,” the researchers note in the paper. “We aimed to develop a novel, safe, controllable, non-invasive genetic CRISPR-based technology that could be transferred across species and implemented worldwide in the short-term to combat wild populations.”

With pgSIT proven in fruit flies, the scientists are hoping to develop the technology in Aedes aegypti, the mosquito species responsible for transmitting dengue fever, Zika, yellow fever and other diseases to millions of people.

“The extension of this work to other insect pests could prove to be a general and very useful strategy to deal with many vector-borne diseases that plague humanity and wreak havoc an agriculture globally,” said Suresh Subramani, global director of the Tata Institute for Genetics and Society.