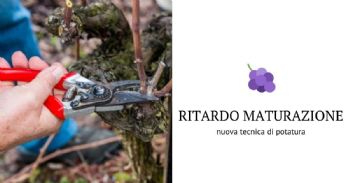 There are several techniques for managing the vegetation of the vineyard, such as late pruning or severe topping, which can delay the ripening of grapes up to fifteen or twenty days. The combination of both techniques allows a delay of up to a month. This delay is considered sufficient to reach a harvest date, in most wine-growing areas, characterized by colder environmental conditions.

But there are extremely hot places, such as those located in Winkler's IV and V regions, with more than 1,950 °C between April and October, where grapes are harvested the first days of August (for example, Montilla-Moriles and Ribera del Guadiana, in Spain). In these cases, with a delay in ripening of one month, the harvest will take place at the beginning of September, when the temperatures are still too high. In these cases, to obtain cooler conditions we should delay the ripening of the grapes by 2-3 months, but the techniques mentioned are not enough.

To obtain a delay in ripening of at least two months, a new technique is proposed based on forcing a new development of the vine starting from newly formed buds. This is an interesting technique to combat the effects of global warming in particularly hot wine-growing areas, which consists in cutting the branches that grow towards June, leaving several nodes in order to force the development of new shoots. In this way, in addition to cutting the branches to the desired height, the leaves and the possible inflorescences or clusters of the nodes left are removed.

The first work carried out in Spain with this technique started in 2015 and had the objective of determining the optimal timing considering the development of the vine and the delay in the ripening of the grapes.