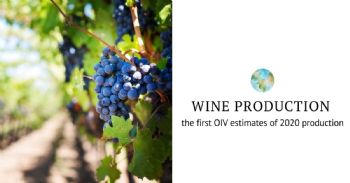 After the exceptionally high production of 2018, for the second consecutive year, the world wine production volume is expected to be below average.

Based on information collected on 30 countries, which represent 84% of the world production in 2019, 2020 world wine production (excluding juices and musts) is estimated between 253.9 and 262.2 mhl, with a mid-range estimate at 258 mhl.

The 2020 production seems in line with the previous year: +1% compared to 2019. After the exceptionally high production of 2018, first estimates on 2020 show for the second consecutive year a production volume that can be defined as below average . This is not necessarily to be considered as bad news for the wine sector given the current context where geopolitical tensions, climate change and covid-19 pandemic are generating a high degree of volatility and uncertainty in the global wine market.

The harvest in the Northern Hemisphere takes place normally between August and October. As for the 2020 harvests, they were not strongly affected by lockdown measures to mitigate the Covid-19 pandemic, in contrast with the vine cultivation period in springtime (April to July).

In the European Union (EU) , good weather conditions favoured a potentially large 2020 harvest; albeit, that has been limited by different measures at both, the government and producers’ association levels aiming at mitigating the (direct and indirect) negative impacts of the Covid-19 pandemic on the global wine market. The production volume this year is estimated at 159.0 mhl (excluding juices and musts), about 5% more than in 2019. This volume shows an annual increase of 7 mhl compared with 2019.

Overall preliminary estimates for 2020 wine production in EU countries indicate a much more heterogenous situation compared with the previous years.

An example is given by the three largest producing countries where, with respect to 2019, there is a drop of -1% in Italy (47.2 mhl), a slight increase of 4% in France (43.9 mhl) and a large rise of more than 11% in Spain (37.5 mhl). It should be noted however, that all three countries, which together account for 49% of the world wine production and 81% of the EU wine production, show preliminary levels of production for 2020 that are lower or just below their last five-year averages.

This is the result of a combination of overall favourable weather conditions during spring and summer and the application of regulation measures. The EU wine Common Market Organisation provides subsidies to regulate volumes, such as green grape harvesting aids. Also, in certain Italian, French and Spanish regions, wine makers decided to fix the vinified volumes at a level inferior to that of 2019 because of the drop in demand on the global wine market.

Wine production volume in Switzerland in 2020 (0.9 mhl) is expected to be not only smaller than last year (-10%/2019), but also 8% smaller than the average observed over the last five-year period.

In the USA, the preliminary estimate for wine production is at 24.7 mhl (+1%/2019).This figure is based on USDA forecasts on the wine-grape harvest, but this figure could be significantly revised in the coming months when more information on the real effects of the wildfires in Napa and Sonoma will be available, since, complications from fire and smoke taint may prevent part of the grapes from being vinified. Furthermore, the oversupply issue that characterised the last few years might also play a role in wine production decisions.

At this time of the year, data on grapes harvest in China is not available. However, wine production is likely to continue the contraction that started in 2016 for structural reasons outlined in the OIV report on the state of the vitivinicultutral sector published in April 2020.

In the Southern hemisphere, where harvests ended in the first trimester of 2020, preliminary figures on wine production tend to be more accurate and reliable in this period of the year. Regarding volumes, a strong decline in wine production is recorded among major producing countries, with a few exceptions. It is worth mentioning that the Covid-19 pandemic spread during the harvesting season, even though this difficulty does not seem to have impacted much, the volumes of production. However, due to unfavourable climatic conditions, the production estimate for 2020 is 49 mhl, which is -8% with respect to 2019.

South America is the region in the Southern Hemisphere that registers a sharper decrease with respect to the production level of 2019. In Argentina, 2020 wine production drops significantly to 10.8 mhl (-17%/2019) due to the unfavourable weather conditions caused by El Niño. Chile, with 10.3 mhl, records a 13% decline with respect to 2019 mainly due to drought. Both countries show production levels that are well below their last five-year average, with -13% and -10% respectively. Brazil has an estimated wine production volume of 2.2 mhl in line with last year a level that is 15% lower than its five-year average.

In South Africa, where drought significantly impacted harvests in 2018 and 2019, wine production in 2020 is estimated at 10.4 mhl, thus, levelling up, back to normality

In Oceania, Australia registers a strong decline in wine production volume in 2020, at 10.6 mhl (-11% compared to 2019 and -16% with respect to its last five-year average). This can be partly explained by a combination of factors that reduced the production volume: the drought reduced the yields, bushfires took place during the harvesting season, and some of the grapes were particularly affected by smoke taint. In New Zealand, wine production shows an opposite trend with respect to Australia and for the fourth year in its history produces more than 3 mhl, precisely 3.3 mhl in 2020 (+11%/2019 and +15% compared to its last five years’ average).