Replacing bentonites during clarification for protein stabilisation of wines

Comparison of alternatives available on the market and laboratory results obtained 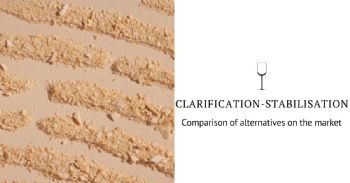 Protein stabilisation is an important stage in winemaking for all wines, but particularly for those subject to export or sold in large-scale distribution. In these cases, possible alterations in clarity, or the presence of precipitates in the bottle, would be difficult for the final consumer to interpret.

The oenological technique for stabilisation involves the use of bentonite during the clarification phase. Although this technique is excellent in terms of its effectiveness and speed of action, it does have some negative aspects, first and foremost with regard to the integrity of the wine: there are in fact certain conditions in which the demand for bentonite necessary for stabilisation is very high, such as in particular degrees of ripeness or specific grape varieties. The use of bentonite in oenology has been studied by numerous researchers who, while recognising its positive effects, have pointed out its action of subtracting elements that are important in defining the strong territorial character of wine. Significant removals of elements that characterise the original aromatic profile and structure have been observed especially at high bentonite dosages.
Equally important is the loss of significant quantities of wine that become part of the lees at the end of clarification.

It is for these reasons that research has experimented with the use of new adjuvants (zeolites, carrageenan, cyclodextrins, etc.) or enzymes, such as protease, that do not have negative effects on wine quality.
Another line of research concerned the study of macromolecules already naturally present in wine, in particular those originating from the lysis of microorganisms.

X-PRO IDENTITY WHITE
The innovative X-PRO® Process allows the obtainment of Specific Inactive Yeasts (SIAs) that are very effective in maintaining the perfect redox conservation of wines.
The production process makes it possible to achieve different goals in terms of product functionality: in this way it is possible to obtain LIS that not only contribute to the improvement of the wine during the ageing phases, but also help to achieve colloidal stability.

In the development of X-PRO® products, the study of their possible interaction with unstable wine proteins was taken into account.
The first tests carried out in comparison with inactive yeasts obtained by "conventional" processes revealed that 30 days after the simple introduction of X-PRO® IDENTITY WHITE into the wine, protein stability was significantly improved (Graph 1).
On the other hand, following the dosage of Conventional Inactive Yeasts, the protein stability of the wine did not improve in any case, which is a sign that the conventional production process brings modifications to the original structure of the derivative, in fact they do not present the positive secondary functionalities typical of the new LIS obtained with the X-PRO process.

Some tests carried out in 2019 in productions of a certain importance have also confirmed these observations, in particular in an experiment conducted on Soave wines, to which 5 g/hL of X-PRO® IDENTITY WHITE was added at the end of alcoholic fermentation. The Specific Inactive Yeast was integrated with their natural fine lees, which were kept in contact until the end of January 2020.
In previous years, 25-35 g/hL of a good sodium bentonite had been needed to achieve protein stability for this type of wine.

After 40 days from the treatment with X-PRO® IDENTITY WHITE, tests for protein stability began to be carried out on the wines under examination, which were found to be already stable without having undergone any treatment with bentonite. Subsequently, three samples were studied by the laboratory of Enologica Vason, which further confirmed the stability situation, determined thanks to the use of the indicated doses of X-PRO® IDENTITY WHITE.
The method used for this verification is PROTEOTEST®, the practical test that is carried out cold, in order to follow the real oenological conditions.
These interesting results have been repeated at different latitudes and, depending on the dosages used, have always highlighted an evident decrease in the bentonite necessary for the protein stabilisation of the wines under examination.

Table 1 shows how wines treated with X-PRO® IDENTITY WHITE continuously improve their protein stability over a period of about 4 months. In this case, the three tests most commonly used in the oenological sector were used: Proteotest®, heat test, heated tannin.
The products in the X-PRO® range provide a valuable balance to the redox system. In Graph 2, the CIELab coordinates show a continuous improvement over the 45 days following the test, thanks in part to X-PRO® IDENTITY WHITE, which was created to preserve the wine's original organoleptic characteristics in order to enhance its identity.

Conclusions
X-PRO® IDENTITY WHITE proves to be a tool of particular interest for the improvement of protein stability in the winery.
Treatments with X-PRO® IDENTITY WHITE greatly benefit the maintenance of wine freshness over time, an important aspect, observable with the preservation of the original chromatic and aromatic characteristics.
Further scientific studies are in progress on young vintage wines, in order to better understand the dynamics involved in these mechanisms.