Smoke taint: sensitivity of grapes throughout the growth season 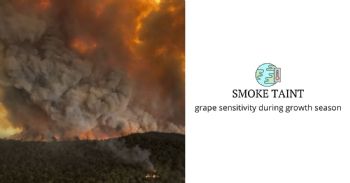 For grapegrowers in the Adelaide Hills, the question of grape sensitivity to smoke taint throughout the growing season was raised following fires last summer. Australian Wine Research Institute (AWRI) scientist Dr Mango Parker was one of a core group who stepped in to assist and will share her research findings at the National Wine Sector Bushfire Conference, to be held on 25 May 2021.

The project was driven by the practical questions of winemakers and grapegrowers in the hours and days following the Cudlee Creek bushfire, and the project was designed and initiated within four weeks. The research initiative was a team effort, with input from winemakers, grapegrowers, landholders, AWRI scientists, Wine Australia staff and the South Australian State Government.

The project sought to determine whether this reaction occurred in unripe grapes, or whether other metabolites besides glycosides would be formed. A rigorous plan was devised, with replicated vineyard sampling across 11 vineyards, three key varieties and 24 wines for assessment. Results showed that smoke exposure at any time during the ripening period after flowering poses a risk of smoke taint. However, some of the vineyards quite close to the fire produced wines that were not noticeably smoky, so testing each site will be important. The research team was also able to detect smoke markers four weeks after the fire event, while the berries were still green and unripe. This means that berries can be tested for smoke taint compounds much earlier than previously thought. Interestingly, the smoke flavour was more obvious in some varieties than others.

For more information we recommend reading the following articles on the subject: