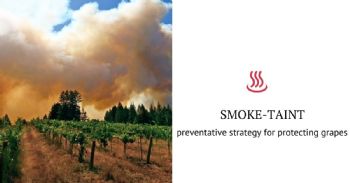 It’s a problem plaguing grape-growers worldwide—in an ever-changing climate, how can they protect their crops from the undesirable effects of wildfire smoke exposure.

A recent study by a team of UBC Okanagan researchers has led to the development of a preventative strategy for protecting grapes from volatile phenols—flavoured compounds present in smoke that may be absorbed into ripening grapes and subsequently impact wine flavour.

“It’s definitely one of, if not the, biggest concern wine-making communities are facing today,” says Wesley Zandberg, assistant professor in chemistry at UBC Okanagan and study author.

“When you look at the catastrophic wildfire seasons California and British Columbia have experienced in recent years, and the season Australia is experiencing now, I don’t think a solution can come quickly enough,” he says. “Winemakers are under a lot of pressure to find a way to protect their crops.”

Zandberg and his team tested multiple substances and found that applying an agricultural spray composed of phospholipids—typically used to prevent cracking in cherries—to wine grapes one week before exposing them to simulated forest fire smoke significantly reduced the levels of volatile phenols measured in smoke-exposed grapes at commercial maturity.

“The results are encouraging,” says Zandberg. “This strategy has shown potential in its ability to protect crops.”

According to Zandberg, when wine grapes absorb compounds from smoke, the grapes react by coating the compounds in sugar using their enzymes. This sugar coating masks the smoky odour and taste of volatile phenols until it’s released again by yeast during the fermentation process.

“Many grape-growers don’t have the means to pay to test their crops, so since smoke-taint can’t be reliably detected until grapes are fermented, producers have to wait weeks to know whether their plants are suitable or not,” explains Zandberg. “Meanwhile, costs and risks mount as their crops sit on the vine.”

Zandberg adds that smoke-tainted crops can have a more devastating effect for some wine producers than others.

“A lot of wineries in the Okanagan Valley only use local grapes, so they don’t have the option of purchasing grapes from Washington or Oregon, as they wouldn’t be considered local,” explains Zandberg. “When your whole business model is fermenting what you produce, you’re in big trouble if your grapes are tainted.”

For Zandberg, it’s the people and their livelihoods that keep him determined to find a solution.

“In 2003, the wildfires in Australia cost their wine industry $300 million dollars in lost revenue, and I imagine they’ll experience a similar loss this year, if not more,” he says.

“Our team has developed a strategy that’s proven to be successful, but there’s still a long way to go,” admits Zandberg. “Now, we need to work on replicating and refining these results to alleviate crop losses experienced globally by the wine industry.”