UV light may be ripe to replace chemicals in fungal fight 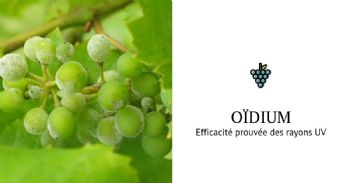 A team of researchers led by Cornell AgriTech’s David Gadoury has spent the last five years refining the science and applied technology behind using ultraviolet (UV) light to kill the fungi that cause powdery mildew. This year, the team will work with leading growers and extension divisions across the US to conduct nearly 20 trials with numerous crops. Above, UV light technology being used at night to suppress powdery mildew on grapevines at a Cornell AgriTech research field.

Farmers may no longer have to rely exclusively on fungicides to suppress destructive plant pathogens like powdery mildew fungi (PM). The international, multidisciplinary Light and Plant Health team of researchers led by Cornell AgriTech’s David Gadoury has spent the last five years refining the science and applied technology behind using ultraviolet (UV) light to kill the fungi that cause PM, opening the door for the technology’s use to control other plant pathogens.

“In more than three years of trials, UV light applications worked as well or better than available fungicides, killing 95 percent of PM in field strawberries. We’ve seen similar results in field and greenhouse trials of basil, roses, grapes and cucumbers,” said Gadoury, senior research associate in the Section of Plant Pathology and Plant Microbe-Biology in the School of Integrative Plant Science.

Recent research from Gadoury’s lab in collaboration with the Vitis Gen2 project indicates that UV light may also control downy mildew, one of the most destructive plant pathogens for a variety of plants. In research trials at Cornell AgriTech over the past few months, pretreatment of grapevines with UV light stimulated their natural resistance to infection, something that the downy mildew pathogen can usually evade. The research suggests that UV light pretreatments may boost overall plant defenses against pathogens.

Controlling crop diseases is a complicated process of managing resistance to available treatments while fighting multiple pests on multiple fronts. Gadoury said that if farmers can knock out PM—one of the most difficult pathogens to suppress with fungicides—they can more efficiently manage the remaining diseases and insect pests. Using UV light to do this allows growers to use fewer fungicides, preserve their effectiveness and see significant savings.

This option is especially critical for organic growers, who often have a more limited arsenal of control measures. And, for high-value specialty crops like strawberries, grapes and greenhouse cucumbers—which are some of the most heavily treated with fungicides—using UV light could expand organic production. The team’s work is supported by a $1.7 million Organic Agriculture Research and Extension Initiative grant from the U.S. Department of Agriculture, as well as by major grants from the USDA Specialty Crop Research Initiative, the USDA Crop Protection and Pest Management program and the National Research Council of Norway.

The relationship between science and UV light technology is strikingly simple. Fungi have evolved light-sensing systems, which they use to control their development. They also have a system that rapidly repairs DNA damaged by constant exposure to UV light. Eight years ago, project partners Aruppillai Suthaparan and Arne Stensvand, at the Norwegian Institute of Bioeconomy Research (NIBIO), discovered that powdery mildew fungi shut down this repair mechanism at night. The researchers were then able to exploit this weakness, exposing fungi to a small amount of UV light at night—killing the pathogen without harming the plants.

To move this critical discovery from the lab to growers required the combined talents of a diverse project team from Cornell, the University of Florida Gulf Coast Research and Education Center, Rensselaer Polytechnic Institute, the USDA Agricultural Research Service Grape Genetics Research unit, NIBIO and the Norwegian University of Life Sciences. The team has now defined UV light wavelengths and doses for a variety of crops and conditions while also developing inexpensive, efficient lighting and delivery systems—such as low-tech tractor attachments.

This year, farmers will have more chances to see the effects of UV light on crops: Working with leading growers and extension divisions across the U.S., the team will conduct nearly 20 trials with strawberries, squash, pumpkins, cucumbers, grapes, hops, basil and industrial hemp. In New York, the first commercial grapevine field trial will run in Hammondsport at Bully Hill Vineyards, which also is a sponsor and partner in related research at Cornell AgriTech.

“Sustainable viticulture is a foundation on which Bully Hill has built its success, and UV technology is a game changer for our spray program. We’re at the mercy of Mother Nature when applying fungicides, and powdery mildew is constantly evolving to combat the effectiveness of current formulations,” said Greg Taylor, director of sales and son of winery founder Walter Taylor. “We are also enthusiastic about the prospect of using UV technology against downy mildew.  If commercially viable, this will only increase the technology’s value.”