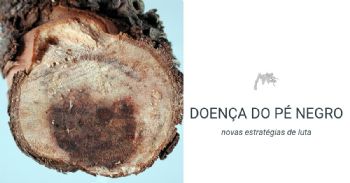 Two field experiments were established to evaluate the effect of white mustard cover crop residue amendment and chemical fumigation with propamocarb + fosetyl-Al combined with Trichoderma spp. root treatment on the viability of black-foot inoculum in soil and fungal infection in grafted plants and grapevine seedlings used as bait plants.

A total of 876 black-foot pathogen isolates were collected from grafted plants and grapevine seedlings used as bait plants in both fields.

White mustard biofumigation reduced inoculum of Dactylonectria torresensis and the incidence and severity of black-foot of grapevine, but no added benefit was obtained when biofumigation was used with Trichoderma spp. root treatments. The effect of white mustard residues and chemical fumigation on populations of D. torresensis propagules in soil was inconsistent, possibly because of varying pretreatment inoculum levels.