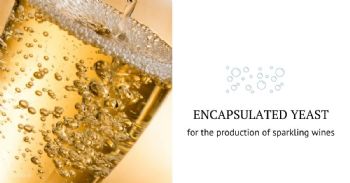 Despite the efforts recently made to improve the application of encapsulated yeasts in the secondary fermentation for the production of sparkling wines by traditional method, no research investigated the use of yeast in multilayered biopolymer microcapsules.

In this work, a strain S. cerevisiae bayanus was entrapped, for the first time, into chitosan-calcium alginate double layer microcapsules, and it was successfully used for the production of Riesling sparkling wine by traditional method.

A stepwise adaptation to ethanol of yeast before encapsulation was developed and this phase resulted crucial to enhance yeast metabolism. The strain free and encapsulated, both adapted and not to ethanol, successfully completed the secondary fermentation, reaching about 6 bars in bottle, but following different kinetic of pressure increase during Prise de mousse.

Comparing volatile compounds of the obtained sparkling wines, after 6 months of aging, a significant higher level of total aldehydes, ketones, as well as a significant lower amount of acids was found in samples produced by free yeast (adapted or not to ethanol) with respect to the encapsulated ones.

Moreover, it was evident that the ethanol adaptation phase had an appreciable effect on the concentration of total alcohols, which was significantly lower in sparkling wines obtained by ethanol-adapted yeasts, both in free and encapsulated forms.

Finally, sparkling wines produced by encapsulated yeast (previously adapted to ethanol) had sensory properties, in terms of aroma, taste, body and foam quality similar to those obtained by free yeasts (both adapted and not to ethanol).