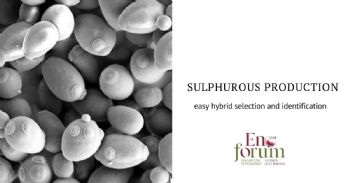 Despite the intensive use of selected wine yeasts, there is still a margin for technological improvement. Previous studies on yeast genetics have shown that many of their characters, which determine the quality of wines, have a genetic basis and are susceptible to manipulation.

This work addresses the genetic improvement of a high-sulphurous-producer yeast using a method for homothallic wine yeast based on spore hybridization that allows easy hybrid selection and identification.

The method takes advantage of the fact that the killer phenotype is very frequent among wine yeasts.

Initially, many low-sulphurous-producer hybrids K+ CYHR were obtained, all of them with a good fermentative capacity in synthetic must with respect to the original yeast. This result suggests that this method for homothallic yeast hybridization is very useful for industrial yeast improvement.