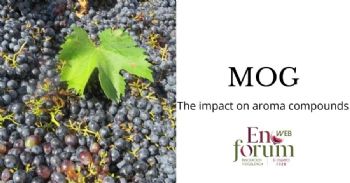 Concentrations of key odor-active compounds were quantified by GCMS with stir bar sorptive extraction. Article based on the paper presented at the SIVE OENOPPIA Awards (12th edition of Enoforum; Vicenza, Italy, May 21-23, 2019).

Article based on the paper presented at the SIVE OENOPPIA Awards (12th edition of Enoforum; Vicenza, Italy, May 21-23, 2019).