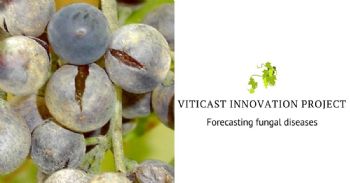 VITICAST is a Spanish supra-autonomous Operational Group whose aim is to develop innovative solutions for the prediction of fungal diseases in grapevines.

Grapevine fungal diseases (among which powdery mildew, downy mildew and botrytis present a higher incidence) are endemic in the entire territory of the Iberian Peninsula and its appearance depends on climatology. These diseases weaken the vines and affect the production, harvesting, transformation and selling processes as well as the final consumer. Great losses in the production between 20 and 80% may occur, as well as a decrease in quality and increased production, harvesting and transformation costs.

The treatment with phytosanitary products following prefixed schedules or only based on meteorological conditions is the conventional procedure to fight against these diseases. However, this practice usually results in an excessive use of phytosanitary products, which implies an increase in the production costs, the appearance of resistances and a higher risk of air, water, soil and grape pollution.

By developing a tool which combines meteorological data measured at the vineyard level, the phenological stage of the vine and the concentration of spores and inoculum necessary for the infection to occur, VITICAST will forecast possible fungal infections. This tool will allow reducing antifungal treatments applied in the vineyard. Therefore, it will facilitate the work of cooperatives and wine cellars, contributing to the production of a higher quality wine and a more sustainable production by minimizing the impacts on the environment related to the application of phytosanitary products through the innovation in the management of fungal diseases of higher incidence (downy mildew, powdery mildew and botrytis).

The main objectives are the optimization of the production and the sustainable development of the vine cultivation in the most important bioclimatic regions in the Spanish northwest (vineyards under study are located within the following Appellations of Origin (A.O.): Rías Baixas, Ribeiro, Valdeorras and Ribera del Duero).

Operational Groups are the main actors in the implementation of the EIP-Agri (European Innovation Partnership for Agricultural productivity and sustainability), and one of the key tools for the execution of the National Rural Development Programme 2014-2020 for promoting innovation in the agri-food and forestry sectors within the European scope. They gather agents of different profiles with common interests, such as farmers, ranchers, companies, researchers or training and dissemination actors, who are associated to implement an innovation project in order to provide a joint and multi-sectorial response to a problem or need. VITICAST innovation project is funded by 599,957.11€, 80% co-funded by the European Agricultural Fund for Rural Development (EAFRD) of the European Union and 20% by the Ministry of Agriculture, Fisheries and Food, within the framework of the National Rural Development Programme 2014-2020.

In order to carry out this initiative, a multidisciplinary operational group with supra-autonomous character has been created. It is comprised by total of 11 participants including beneficiaries/partners from Galicia and Castilla y León (specifically in the A.O.: Rías Baixas, Ribeiro, Valdeorras and Ribera del Duero), as well as subcontracted members and collaborators.

In addition, the University of Santiago de Compostela is a subcontracted member. The Wine Technology Platform (PTV), the Association of Ribeiro Bottling and Harvesters (ACER) and the Galician Association of Viticulture (AGV) act as collaborators.

Objectives and expected results of the project

As previously mentioned, the main objective of the VITICAST project is to optimize the use of phytosanitary treatments through innovative solutions in the management of the fungal diseases of higher incidence (downy mildew, powdery mildew and botrytis) in order to achieve an improvement of wine quality, greater protection of the environment and an optimization of production costs. Besides, the project aims to determine the start of the different phenological stages of the vineyard based on grape variety and to stablish specific models for each Appellation of Origin under study.

As the general objective of the project is the development and implementation of innovative solutions for the prediction of fungal diseases in vineyards, the expected results are the following:

Also, the following results will be obtained in order to evaluate the benefits of the implementation of the prediction and warning tools in the studied A.O.:

Results: Identification of the propitious moments of infection based on meteorological conditions

Two models have been developed to identify propitious moments of infection of powdery mildew. The first model assays the pressure of powdery mildew considering meteorological conditions. The second model evaluates the pressure considering not only meteorological conditions, but also the phenological stage of the vineyard. The objective of this second model is to weigh the risk when the bunch is more susceptible to be infected. Thus, the second model is focused on protecting the bunch, whereas the first model is centred on protecting the plant.

The following results were obtained for the 2020 campaign. As shown in Figure 1, on June the 29th, a high risk of infection (100%) was provided by the first model, while the second model (which also considers phenology), provided low risk of infection (16.27%). Hence, this tool makes it possible to optimize the use of phytosanitary treatments in the vineyard as they will only be used when the bunch is at serious risk due to a powdery mildew attack.

Figure 2. Sporulation and secondary infections and incubations of downy mildew.

This cycle (Figure 3) is repeated throughout the campaign, allowing the identification of the propitious moments of infection based on meteorological conditions. As a result, with the data collected throughout the 2-year-project, a predictive tool of the risk of infection will notify when the grapevine is more vulnerable to downy mildew, using phytosanitary products only when necessary.

Figure 3. Cycle of downy mildew throughout the campaign.

Results: Identification of the risk of infection based on the presence of spores

To determine the presence of spores in the environment, aerobiological sensors set on each plot of the project are used. The collected spores are afterwards counted in the laboratory under microscope.

A preliminary model using Artificial Intelligence (AI) techniques was developed (Figure 4). The inputs to the model are the data measured with the meteorological stations and the output is an indicator of the risk of disease on the specific day. This risk was assayed based on the concentration of spores in the air and the information provided by the technicians of the moments in which symptoms of disease were observed in the vineyard.

Figure 4. Architecture of one of the neuronal nets used to develop the models.

To fully develop these models, the information was divided into two groups of data: a group called training, which is used to generate the model; and a test group, to check if the model learned from the trained data.

The performance of the models obtained for each of the three diseases under study (downy mildew, powdery mildew and botrytis) is measured based on the following parameters: the probability of success, the probability of a false positive (that is, those cases in which risk is detected when actually there is not) and false negative probability (not risk is detected when actually there is). As depicted in Table 1 below, the probability of success was 95.0%, 94.4% and 97.0% for downy mildew, powdery mildew and botrytris, respectively, which indicates that AI techniques are viable to provide the risk or disease in the vineyard.

Table 1. Performance of the generated models.