Chemical characteristics of wine made by disease tolerant varieties 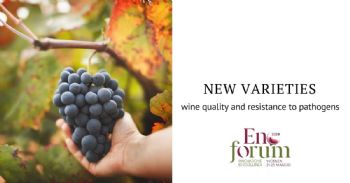 New disease tolerant varieties of Vitis vinifera, which combine wine quality and resistance to pathogens, have the potential to reduce the application of chemical products significantly as well as to reduce the production costs allowing significant cost savings for winegrowers.

However, since these varieties still suffer from negative prejudice related to the poor wine quality of the first varieties developed, it is necessary to gain more information about their qualitative traits in order to promote their use and diffusion for wine production.

The aim of this study was to characterise the chemical composition of wine produced from a wide selection of some promising disease tolerant grape varieties grown in Italy and Germany in three different years.

A multi-targeted approach using different analytical techniques (GC-MS, HS-GC-PFPD, UPLC-MS/MS, NMR and FT-MIR analysis) was adopted to investigate the main classes of volatile and non-volatile compounds playing a key role in the organoleptic and sensory properties of wine.

The results showed the strong influence of the vintage on the chemical composition of wine and good stability of the metabolite profile of wines produced from grape varieties grown in different vineyard locations.

Overall, by providing broad coverage of grape composition and diversity, this study highlighted substantial overlapping of the chemical space of traditional and disease tolerant cultivars.

Since grape quality is a crucial prerequisite for wine quality, the chemical composition of the grapes from disease tolerant varieties was also analysed.

Finally, bearing in mind the role of wild Vitis genotypes as a source of genetic resistance to biotic and abiotic stresses, the metabolomic profile of grapes from non-V. vinifera genotypes was explored.