Biogenic amines are undesirable compounds in wine synthesized by lactic acid bacteria. Aside from being toxic to humans, biogenic amines depreciate the quality of wines.

This study began with the arrival to the laboratory of a sample of wine from Tempranillo, whose histamine concentration was above 10 mg/L. The aim was the isolation, identification and characterization of those microorganisms responsible for the synthesis of histamine. Four strains of Oenococcus oeni and two strains of microorganisms whose 16S gene sequence identified as Staphylococcus epidermidis were isolated. To discard the possibility of environmental contamination the isolation was repeated, obtaining again such strains of Staphylococcus epidermidis from the wine.

This microorganism is described as histamine producer in various foods, but never before it was isolated from wine neither its ability to produce histamine in wine had been reported. Then we proceeded to carry out the relevant tests to determine which of the different isolates was responsible for histamine production in this wine. Such assays showed as only one histamine producer strain of Staphylococcus epidermidis, not showing any of the isolates from Oenococcus oeni such ability. Surprisingly, this Staphylococcus epidermidis strain was not only able to produce histamine, but also putrescine and cadaverine. This shows the need for the asepsis in the cellars and care in manufacturing processes, warning of the existence of this type of organisms in wine, although sporadic, could have a major negative impact on the final quality of the wine. 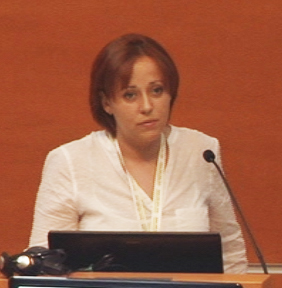 Finalist of the 2013 International SIVE Awards “Research for Development”. The paper reproduced in this video-seminar was presented at the 8th edition of Enoforum (7-9 maggio 2013, Arezzo, Italy)

The video-seminar is conceived as a true professional update course lasting more than 15 minutes. Therefore, before starting to watch the video, we recommend that you prepare yourself for a uninterrupted session (ex. make sure you are free of all other engagements for the whole duration, turn off your cell phone and be equipped with materials to take notes).

Access the video-seminar from the menu on the right, at a cost of € 25,00 Infowine Pay-Per-View Credits. The fee payment entitles you to 2 accesses.
If you purchased an annual subscription, you have unlimited access to videos and all other documents for a period of 12 months.

You can purchase Pay-Per-View Credits or subscribe after login, by using the menu on the top right.
Read the “web visualization instructions” before starting to watch the video.