Protection against fungal grapevine trunk pathogens by Trichoderma atroviride SC1 treatments from nursery to the vineyard: a three-year study 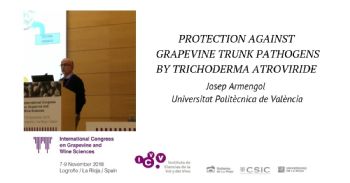 Trichoderma atroviride SC1, applied at the hydration, callusing and pre-planting stages, has been reported to effectively control infections caused by the grapevine trunk pathogens Phaeomoniella chlamydospora and Phaeoacremonium minimum in nurseries.

In this research, an experiment was carried out using cuttings of 110 R rootstock subsequently grafted with Garnacha Tintorera cultivar. These materials were subjected to two different management strategies:
i) In the 2015 growing season, treatments with a suspension of formulated T. atroviride SC1, which were applied during the nursery propagation process. Then, in 2016, they were treated with T. atroviride SC1, which was applied at the planting moment in two different commercial vineyards and, later, in 2017 a treatment with T. atroviride SC1 at the pruning moment also in both vineyards;
ii) Treatments with water (control) at each of the previously described moments in 2015, 2016 and 2017.

The effect of the two strategies was compared by fungal isolation from treated and untreated plants on culture media (2015, 2016 and 2017) and by measuring undried shoot weight in the vineyard (2016 and 2017).

Results showed that in the three years, grafted grapevine plants treated with T. atroviride SC1 in the nursery and in the vineyard showed a higher phytosanitary quality than untreated plants, due to reduced isolation of grapevine fungal trunk pathogens.

The paper reproduced in this video-seminar was presented at the International Congress on Grapevine and Wine Sciences - ICGWS (Logroño, Spain, November 7-9, 2018) organized by ICVV.