Pulsed Electric Fields, an innovative technology for the winemaking process 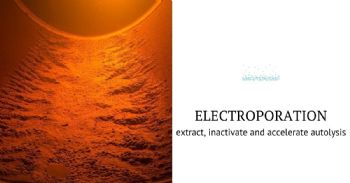 In the last decades, major efforts have been made in the development of technologies that allow food to be processed at temperatures lower than those normally used in order to avoid the negative effects of heat on the nutritional and sensory properties of foods. These techniques are generally referred to as non-thermal treatment technologies and include high hydrostatic pressures, ultrasounds, ultraviolet radiations or high voltage electrical pulses (PEF). Among these technologies, the most studied in the enological field was the PEF.

These treatments cause a phenomenon called electroporation, which consists in increasing the permeability of the cytoplasmic membrane of both plant and microbial cells. These treatments at different intensities, facilitate the extraction of phenolic compounds from the skins during the maceration-fermentation, allow to inactivate undesired microorganisms in must or wine, and it has been recently shown that they accelerate the yeast autolysis process during wine refining on the lees. All these effects can be of great interest to improve the competitiveness of wineries.

A research group of the University of Zaragoza, a pioneer in the field of research on the application of PEF, is studying the use of this technology in the oenological sector.

First of all, its application is being studied to facilitate the extraction of phenolic compounds from the skins. In recent years, various techniques have been proposed such as thermovinification or 'flash detente', but compared to these technologies, PEF allows to improve the extraction with cheaper installation investment costs, with lower energy costs, without increasing the temperature of the grapes and thus maintaining the varietal character of the wines and without the need for installations that occupy a space in the cellar permanently.

Another application being studied is the use of this technology for the treatment of lees in order to accelerate the release of mannoproteins during refinement, since this technology causes an increase in the permeability of the cytoplasmic membrane of the cells (electroporation). The results obtained show the great potential of PEF technology to reduce costs and risks of microbiological alteration in the aging process on the lees.

Another aspect is the ability of PEF to inactivate microorganisms at lower temperatures than those used in thermal processes. In fact, the treatment of the must before fermentation could not only contribute to reducing or eliminating the addition of SO2, but also allow more reproducible fermentations with starter cultures, thanks to the absence or presence in the lower concentration of wild yeasts. On the other hand, the PEF treatment of wine before bottling could avoid having to carry out the last filtration, preserving its sensory properties.

The recent development of PEF devices with sufficient power to meet the requirements of processing in the cellar and at increasingly reduced costs, the simple installation of the treatment rooms in the existing processing lines, and the low energy consumption of this technology are the key to its great interest in the oenological sector.

Below we offer the presentations made by this research group on the occasion of the 11th edition of Enoforum in Zaragoza: