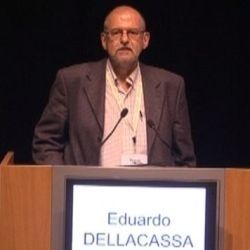 In non-aromatic grape  varieties, such as Vitis vinifera cv Tannat, these glycosides can introduce modifications in the wine aroma profile during aging. The use of fast tools to evaluate the dynamic of the glycosylated norisoprenoids could allow to classify grapes according to its quality defining the optimum maturity for the grape harvest.

NIR spectroscopy is a fast, non-destructive technique wich requires minimal sample preparation. But, its quantitative applications require chemometric models for the results interpretation. Linear models, such as PLS, are the most used, but neural networks (RNs) represent a non-linear model with advantages in the applications.

In this work, NIR-PLS and NIR-RNs were applied to quantify norisoprenoids in Vitis vinifera cv. Tannat grapes, during maturation and harvesting. The profile of glycosidated norisoprenoids determined by GC-MS were used for calibration.

The results obtained demonstrated the potential use of NIR spectroscopy to quantify norisoprenoids in grapes. The best results (mean square error 270 mg / L) used RNs a multilayer perceptron model in the calibration with two hidden layers and a descending gradient algorithm as a learning method.

Work presented at the International SIVE OENOPPIA awards 2017. The paper reproduced in this video-seminar was presented at the 10th edition of Enoforum (May 16th-18th, 2017, Vicenza, Italy)