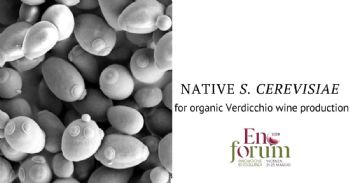 The native Saccharomyces cerevisiae DiSVA 151 strain (Dep. of Life and Environmental Sciences, Polytechnic University of Marche, Italy) isolated from Verdicchio grapes and selected for its oenological properties and ability to confer high aromatic complexity to the wine, was genetically improved for its use in the production of organic wine.

Through genetic rearrangement improved strains that exhibited no H2S production in combination with a low production of acetaldehyde and sulfur dioxide were obtained.

The oenological performance and the aromatic profile of the new S. cerevisiae strains were evaluated under winemaking conditions. In two consecutive winemaking years the strains were evaluated and compared with a S. cerevisiae commercial H2S- strain. The fermentations were carried out at 20 °C in tanks containing 40L of organic Verdicchio grape must.

The new strains exhibited fermentation kinetics comparable to that exhibited by the commercial strain. The main analytical compounds did not differ significantly among the trials. Regarding to the analytical composition of wines the new strains exhibited a different aromatic profile of the control strain with  a lower production of n-propanol and ethyl butyrate and an increase of aromatic compounds responsible of fruity and flower aroma (such as isoamyl acetate and β-phenyl ethanol).

Overall data indicate the peculiar fermentation profile of the new S. cerevisiae  strains that could be used as a new fermentation starter strain, to obtain wines with recognizable aromatic imprinting with low H2S and SO2 content.