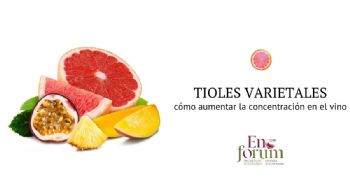 They are released during the alcoholic fermentation from precursors present in grapes. Different biogenetic pathways have been reported for their.

The first two pathways involved cysteinylated and glutathionylated S-conjugates, cleaved by the yeast β-lyase activity. A third pathway has been also identified involving (E)-2-hexenal and (E)-2-hexenol, even if the sulfur donor hasn’t been yet identified. Recently, some new derivatives (aldehyde forms, SO2-combined forms, glutathione derivatives) have been pointed out. The 3MH levels originating from those pathways could explain from up to 60% of the wine 3MH. Thus a large field of investigation is opened to better understand its biogenesis.

Some viticulture techniques favored thiols precursors accumulation in grapes or musts, such as the vine water status and the nitrogen fertilization management (soil fertilizer or foliar spraying), or the oxidation mechanisms during must elaboration.

The General Amino acid Permease 1 (GAP1) is known to be the main transport system for cysteinylated precursors. Its regulation by the ammonium levels in must explain that the yeast nutrient composition (NH4+ / amino acids ration) and time of addition are two key parameters. For glutathionylated precursors transport into the yeast cell, a recent study showed the importance of Opt1 transporters.