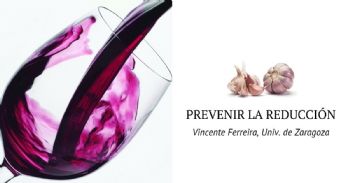 Reductive aromas are caused by the accumulation in wine of little amounts of free H2S and mercaptans, such as methanethiol (MeSH) and ethanethiol (EtSH). These molecules are inevitably formed during alcoholic fermentation in ranges from a few microg/L to more than 200 microg/L, depending on many factors (Nitrogen deficiency, type of yeast, …). Once formed, winemakers try to reduce their levels by aeration, racking and by the addition of different products containing copper; but, are these treatments effective?

Our work in the last years has revealed that these molecules stay in wine as different chemical forms interconnected via different chemical equilibria. Only free forms can be smelled, which means that any treatment involving a change in equilibria from free to complexed or to oxidized forms, gives the (false) impression that the compounds have gone, while they are still there. The problem, is that equilibria will slowly go back to the starting point, so that these compounds may reappear later.

Recent experiences have demonstrated that these compounds are extraordinary resilient and that their elimination is not easy. For instance, copper treatments increase the proportion of complexed forms, but the compounds are still there. The same can happen during aeration.

Only an adequate understanding of the problem, as discussed in this talk, winemakers can design strategies to prevent and limit the occurrence of these problems.