For some years now, the technical evolution of wine buyers has become a fact that on the one hand makes the relationship with the producer more professional, but on the other sees an increase in the demand for specific requirements from both a sensory and analytical point of view for wines to be assessed for purchase.

The great value of wholesomeness is thus increasingly being reflected in the search for wines that reflect precise parameters, even if these differ according to the country to which the wine is destined.

In addition to wholesomeness, the market demands wines with a greater longevity that reflect the territory, preferably produced from native varieties.

The general trend of requests is to reduce sulphites (without obviously having a negative impact on the quality), to minimise the use of adjuvants and to control and manage the levels of dissolved gases in the wine.

When we talk about dissolved gases in wine, we primarily consider oxygen and carbon dioxide.

Slightly more difficult to measure, but often no less important from a sensory point of view, we can find hydrogen sulphide (responsible for negative odours), nitrogen and the volatile fraction of acetaldehyde. 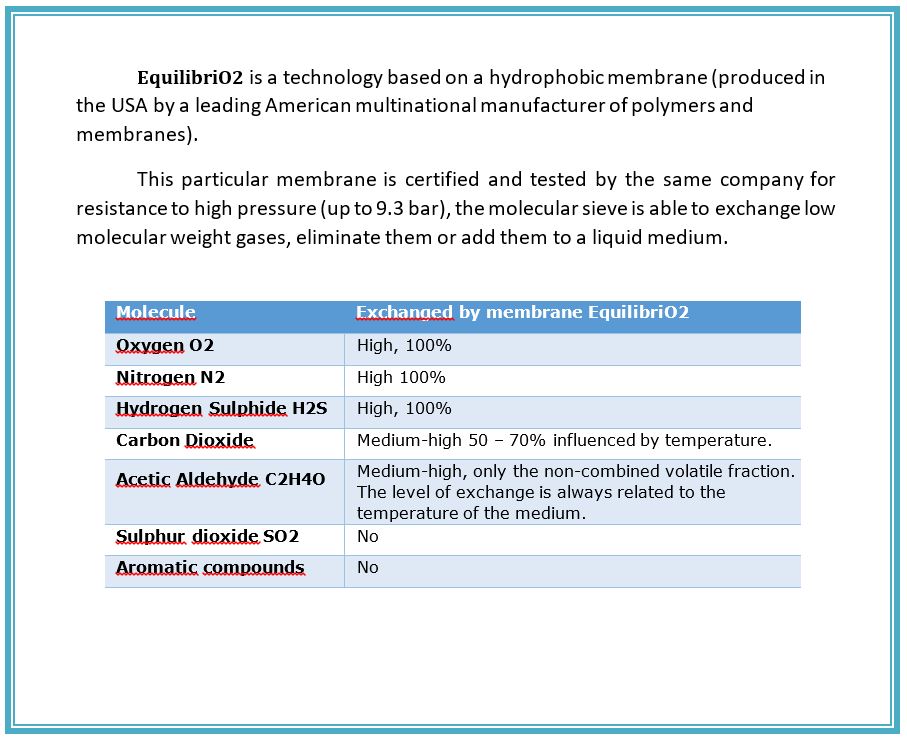 Numerous studies have shown the direct relationship between oxygen content and wine evolution.

While for some processes during wine production the controlled addition of this gas is positive, in the final stages of wine preparation and packaging, oxygen always presents a threat.

In addition, oxygen is responsible for flavour loss, colour changes and the formation of undesirable compounds.

The value of CO2, naturally derived from fermentation, has a significant influence on the sensory and tactile perception of wine in the mouth and the speed at which aromas are released.

The accuracy of the CO2 concentration in sparkling wines is a legal requirement and the tolerance is very low.

In addition, the consumer demands wines with the highest possible level of carbonation.

The technology proposed by Vinext– EquilibriO2 allows the perfect degassing of wines in passage, during racking between autoclaves, at the filtration outlet, or even at the bottling line.

A panel of tasters made up of oenologists, buyers and professionals in the large-scale retail trade as well as consumers showed a significant improvement in the sensory-tactile profile of the wine when the CO2 concentration varied.

The tasting was carried out in June 2018 with wines produced in the 2017 vintage.

The treatments with EquilibriO2 were carried out between March and April 2018. Three wines were tasted: Merlot Veneto, IGT Veronese from slightly raisined grapes, Sangiovese Toscana.

Of each product, a sample of wine was tasted as it was and one after a passage treatment with EquilibriO2.

The concentration of the various gases in the wine are shown in the following table:

* level obtained from a passage through the system

** The level of 300 ppm was set on the system and kept fixed on the various samples, always with a single passage.

The results of sensory analysis show that in red wines, reducing the amount of CO2 results in a greater sensation of volume and smoothness, reduced sensation of astringency, less dryness and less bitterness.

A compound that gives origin to hints of reduction, released by the yeasts during fermentation, especially during phases of nutritional stress.

Another source can be the stay on the lees, especially if it remains compact and not suspended.

Being a volatile, low molecular weight molecule (34 kD), it is removed and eliminated in any treatment with EquilibriO2.

The influence of this gas on sensory characteristics is minimal. In sparkling and semi-sparkling wines, however, the presence of nitrogen increases the measurable overpressure.

The EquilibriO2 technology, by not utilising nitrogen as a technical gas, also manages to eliminate the nitrogen from the fizzy/sparkling wine and any over-pressure due to this gas ensuring that the pressure in the bottle is 100% attributable to the CO2 concentration only.

Is generated mainly from two sources:

Acetaldehyde can be considered as an alarm signal for both microbial alterations and as a signal of pre-oxidation of the wine.

From a sensory point of view, the smell of 'vanished', cooked apple or green apple is typical.

Acetaldehyde is one of the main culprits for the combination of free sulphur dioxide in wines.

The elimination of acetaldehyde via the EquilibriO2 membrane ensures greater freshness and aromatic cleanliness and less combination of free sulphur dioxide, significantly reducing the risk of premature ageing of the wine, increasing the longevity and shelf life of the product.

The technological advantages of dissolved gas management in wine are now well established. Increasingly, this advanced technology demonstrates the positive and important sensory result, which is easily appreciated by the wine consumer.