How to reduce phthalate levels in wine 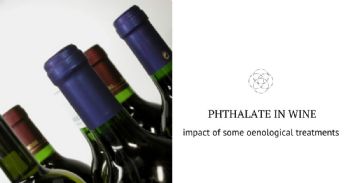 After several tests carried out in the laboratory with the objective of reducing or even eliminating the phthalate and bisphenol A molecules potentially present in the wine, some methods have been identified that allow to obtain good results.

Phthalates are additives commonly used in the production of plastic materials to make them flexible. Bisphenol A is the main component of epoxy resins used for coating tanks of cement or steel used for vinification. These are compounds whose presence is not desirable in wines, since they are classified as toxic substances of category 1B and are suspected of being endocrine disruptors.

The possible sources of contamination during the vinification phase are many and varied. The IFV (French Institute of Vine and Wine) in collaboration with several professional associations has created a working group in order to study the presence of phthalates and bisphenol A in wines, evaluate the impact of different oenological treatments and identify the origin of these molecules along the wine production chain.

The research has shown the frequent presence in wines of two phthalates, dibutyl phthalate (DBP) and benzylbutyl phthalate (BBP), and bisphenol A (BPA). Tanks and hoses coated with epoxy resin are the two main sources of contamination identified.

Dimethylphthalate (DMP) was found mainly in wines aged for several months in fiberglass tanks. DBP is the molecule that is most frequently found but is not initially detected in musts. Therefore, it is during the vinification phase that contamination can occur. The levels are variable but are generally below the specific migration limit (SML) of 0.3 mg/kg.

Several filtration systems, clarifying products and other oenological products were studied in the laboratory.

It was observed that, in general, DMP and BPA are the most difficult to eliminate, while DBP can be eliminated more or less effectively.

The granules of styrene and divinylbenzene copolymers allow an excellent elimination of almost all phthalates and BPA. The reduction obtained is at least 60% and close to 100% for the DBP.

Vegetable fibers have a high absorption capacity of DBP (> 60%), while the impact is less with respect to BPA and tert-butylphenol (average reduction of 20%).

The yeast hulls allow a medium elimination of the DBP. On the other hand, its effect on other phthalates and on BPA is very limited or even non-existent.

The other products studied (fossil flour, cellulose, mannoproteins, chitosan, gelatin, lysozyme, albumin, bentonite, PVPP, casein and pea) showed partial effects or even no effect on the elimination of the target molecules.

In conclusion, it has been shown that some treatments can significantly eliminate DBP, the main phthalate in wines. The most effective treatments were styrene and divinylbenzene copolymer granules, the two types of carbon (decolouring and decontaminant) and selective plant fibers.